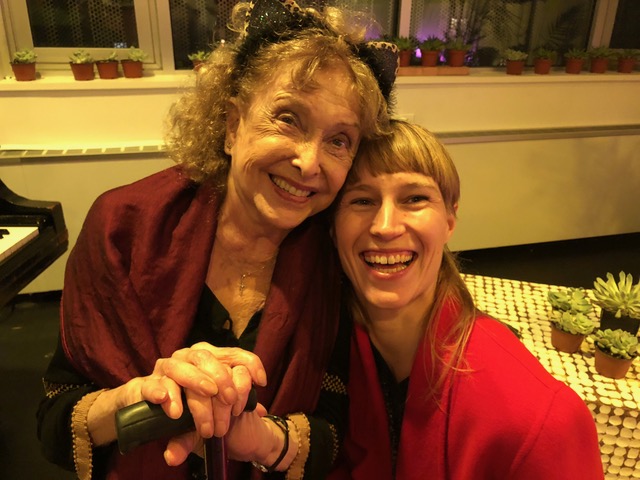 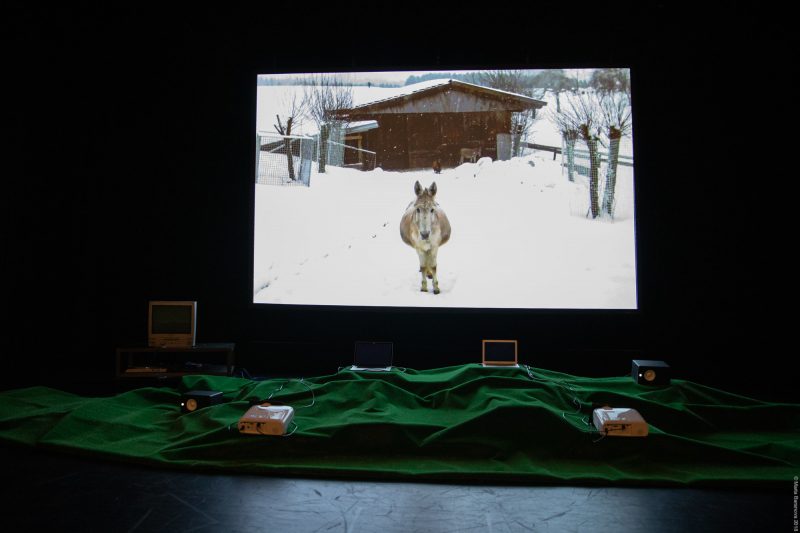 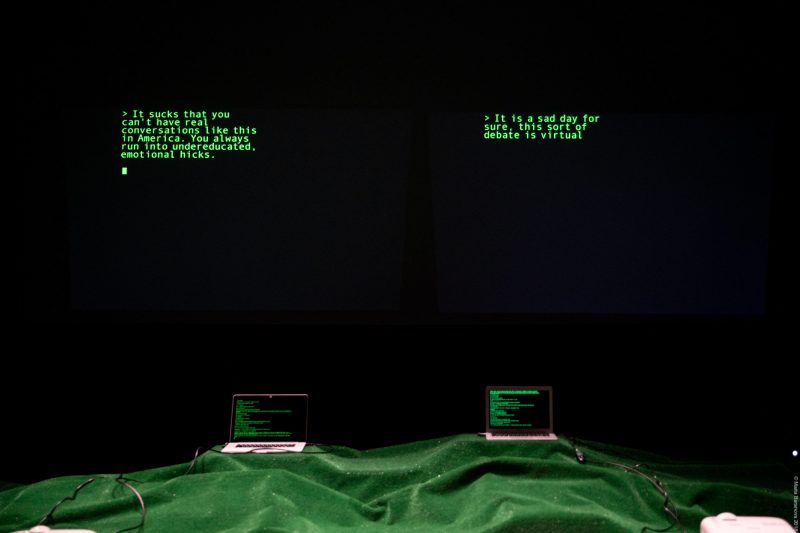 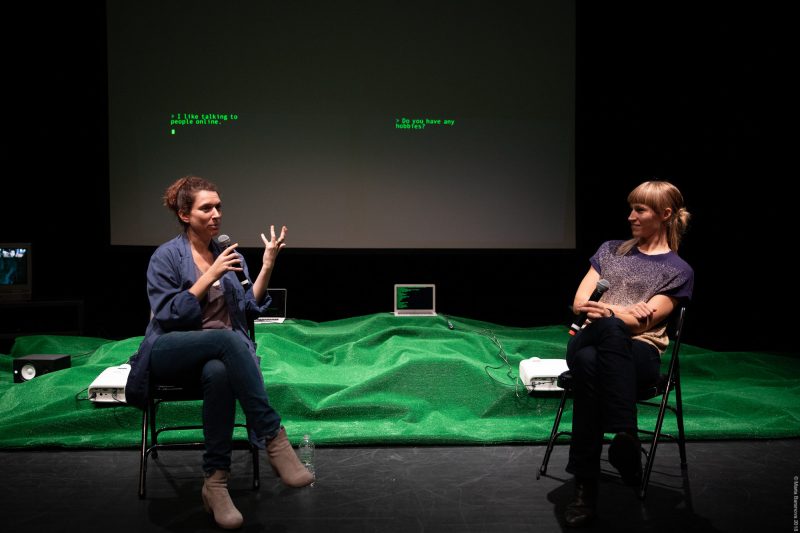 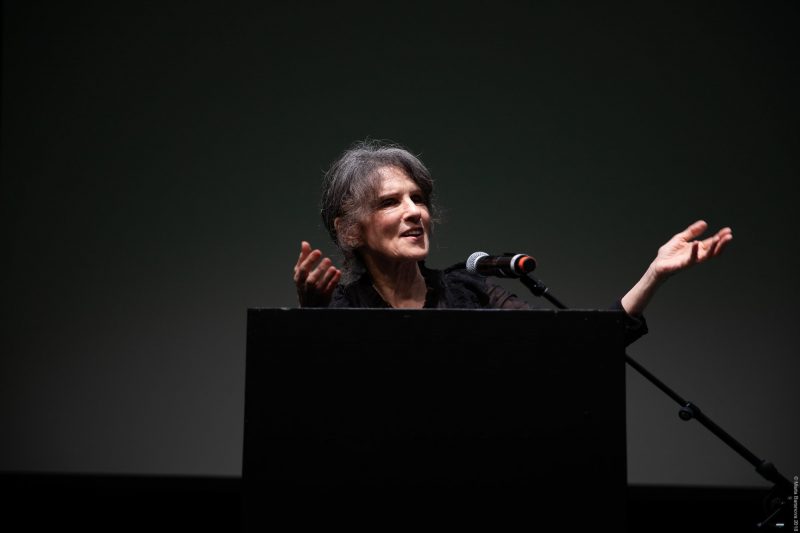 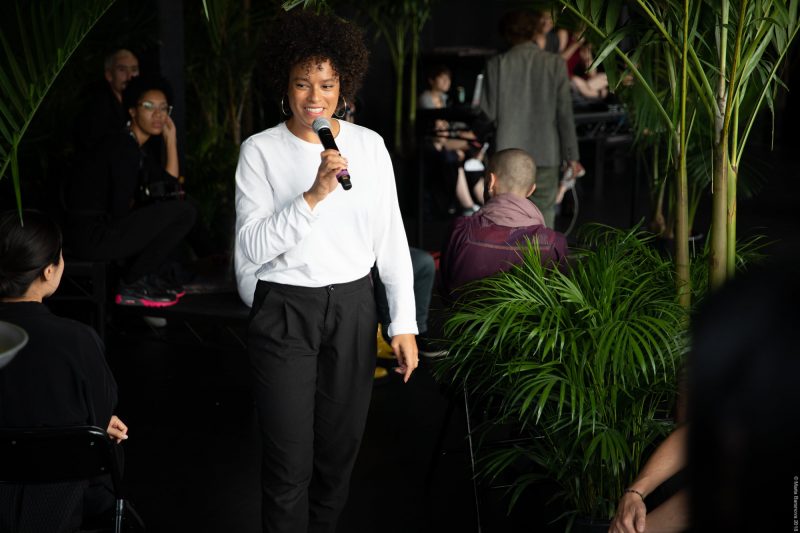 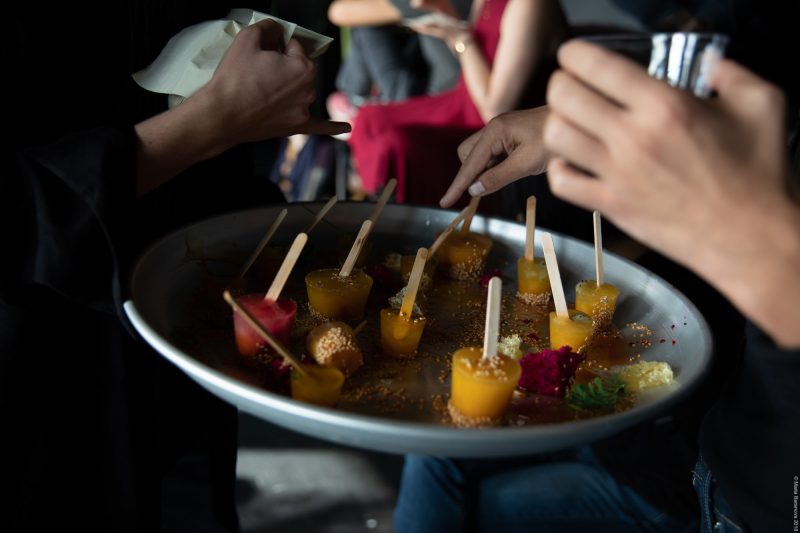 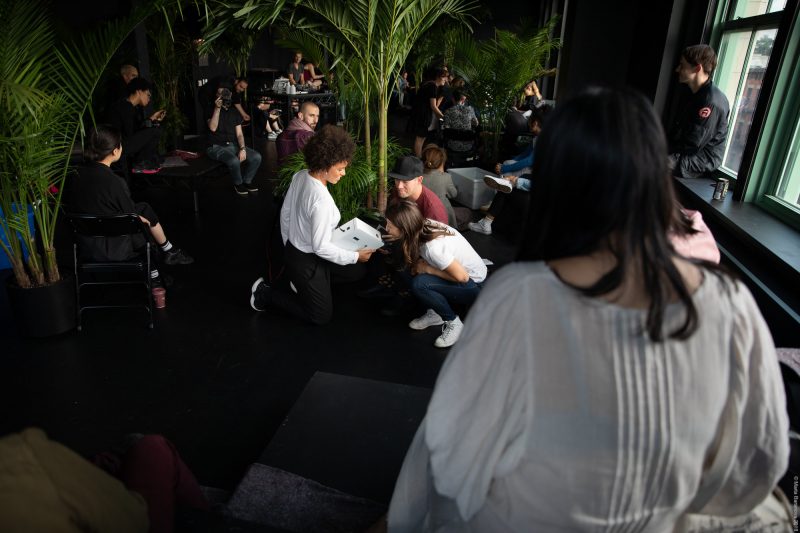 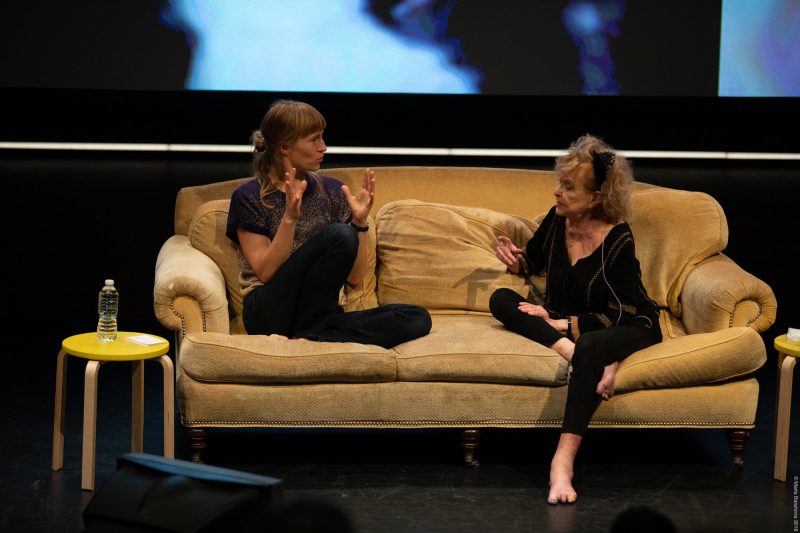 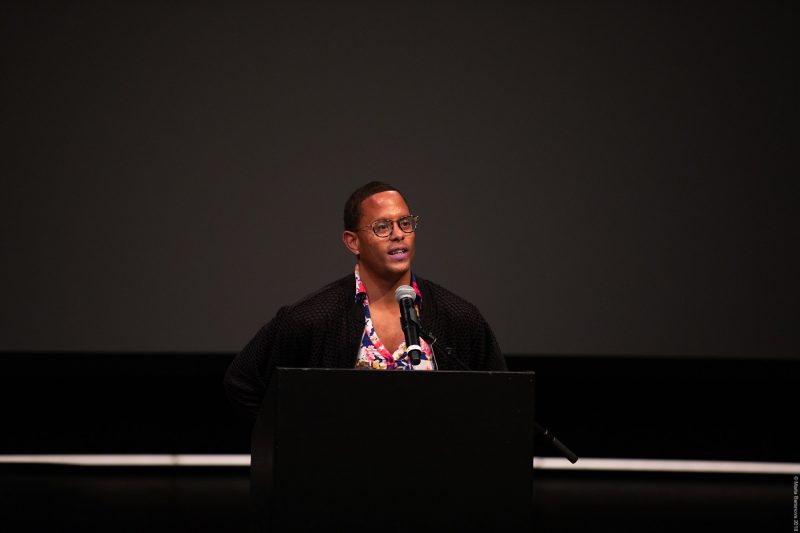 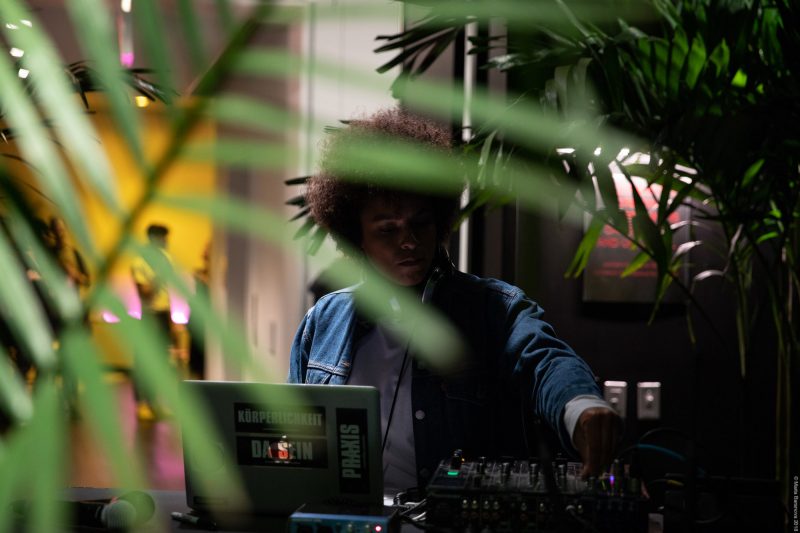 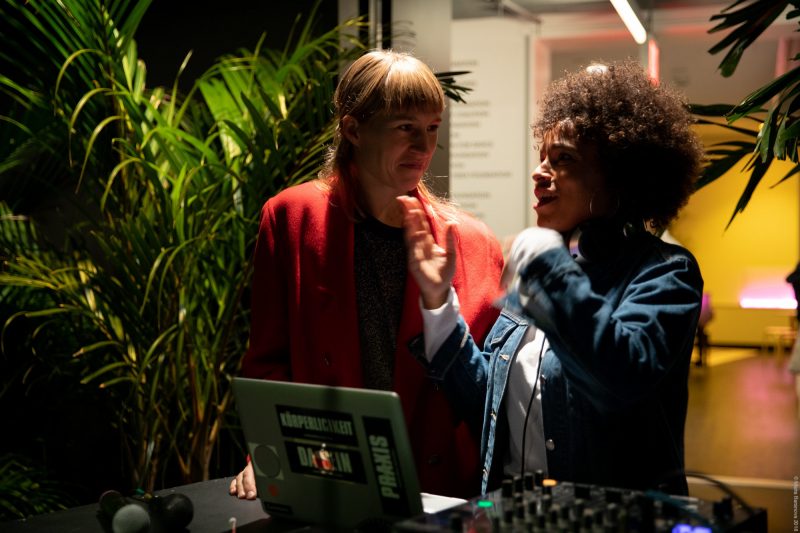 In this third edition of The Permeable Stage, developed in collaboration with Performance Space New York, Mette Ingvartsen invited artists and theorists to share their work within the frame of a performative conference.

The focus of the day was on how to reimagine the social, by including non-humans into the way we think about collective structures and notions of living together. The contributors were invited to share their perspectives on how they understand the relationship between humans, technologies, things, animals, plants and other matters, as these topics emerge directly out of their artistic expressions and theoretical work.

The idea behind The Permeable Stage is to open up a space where artistic, theoretical, social and political approaches can co-exist to produce conversations within a theater context. The public was invited to experience how the different contributions resonated with one another and to participate in making the representational space of the theater into a place for discussion, as well as for sensual occasions of experience and imaginative exchange.

DONKEY WITH SNOW, A Film by Romuald Karmakar, Germany 2010, 4 min

DONKEY WITH SNOW, a still life from Lower Bavaria. It’s snowing. We see Bianca and Ugo, two donkeys, and Ole, a sheep named after a Norwegian cross-country skier. Their barn belongs to an auto-repair-shop. Wolfgang, the owner, got his first donkey when a customer couldn’t pay his bill.
© 2010 Pantera Film GmbH

In this presentation Annie Dorsen will show an extract of one of her earliest works, Hello Hi There from 2010. In this performance she uses the famous television debate between the philosopher Michel Foucault and linguist/activist Noam Chomsky from the Seventies as inspiration and material for a dialogue between two custom-designed chatbots: every evening, these computer programs, designed to mimic human conversations, perform a new – as it were, improvised – live text. As Chomsky and Foucault debate language, creativity, the roots of scientific discovery and the nature of political power, the chatbots talk on and on, endlessly circling the questions of the debate, and frequently veering off into unexpected, at times nonsensical, digressions. The extract will be followed by an interview with Dorsen, focusing on how she uses technology to think about and to create algorithmic performances.

In this lecture, Patricia T. Clough will explore the meaning of subjectivity in these times of digital media and computational technologies. She will discuss the impact on human consciousness and human perception, as well as address the preaffectivity or liveliness of the environment, or what has been referred to as a “worldly sensibility.” She will focus on the work of two scholars who have most influenced her thinking: Luciana Parisi and Mark Hansen, and conclude with some speculations about the working of unconscious processes invited by a post-phenomenological phenomenology.

In this conversation, Mette Ingvartsen and Carolee Schneemann will continue their ongoing dialogue established over six years ago – which has intensified over recent months without their ever having met. Their exchange will concern their affinities for each other’s work and the ways in which their artistic processes collide. As they present extracts from their performances, motives will emerge that are coincidentally aligned, prompting intimate thoughts about the work. The resulting discussion will introduce cultural taboos, such as sexuality, pleasure, nudity, violence – as well as non-human agency and the materiality of objects and spaces.

In this lecture Che Gossett brings together Fanon, Sylvia Wynter, and Afropessimism as well as recent Palestinian films about animal necropolitics to consider both abolitionist aesthetics and how abolition — which might be characterized as what Jared Sexton calls “abolition the interminable radicalization of every radical movement” — and as anchored in black study, is an anti-colonial and interspecies affair. While Palestinian ecological struggle has been documented in leftist and solidarity struggles, there has been less work exploring how the animal is entangled in occupation and Che will discuss the work of Palestinian filmmakers — Giraffada and The Wanted 18 highlighting both Palestinian animal rights activism and
ecological activism. Che will consider how abolition undoes the coordinates of the Human — what Sylvia Wynter called the genre of Man and genre of the “animal” as well. Finally, Che will discuss how blackness radicalizes Palestinian struggle and how we might imagine moving beyond a grammar of “solidarity.”

The Permeable Stage is a proposal by Mette Ingvartsen. This 3rd edition is developed in collaboration with Jenny Schlenzka for Performance Space New York.

Funded By: The Flemish Authorities and the Danish Arts Foundation