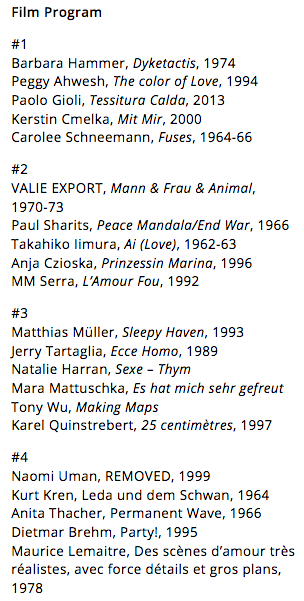 In this second edition of The Permeable Stage, Mette Ingvartsen invited theorists, curators, artists and musicians to share their work through a series of late night lectures, film screenings and a concert.

The topics of the lectures resonated with issues at stake in 21 pornographies and to come (extended), two performances that were presented on the four evenings. They questioned sexualized technologies of security and discipline in contemporary contexts of war, migration and capitalism and explored resistant potentials and pitfalls of wet aesthetics and queer – feminist pornographic art. The Late Night Lectures were held by Petra Van Brabandt, Melanie Richter-Montpetit, Austin Gross and Marie-Luise Angerer and took place one talk each night at 22.30h in the Rote Salon, and were moderated by Bettina Knaup.

In the intermission between the 21 pornographies and to come (extended), the associated film program 21 Pornographies on Film united 21 artists in 4 programs, projected during 4 days in different venues of the theatre. Curated by Giulio Bursi and Mette Ingvartsen, the films featured were by Barbara Hammer, Carolee Schneemann, VALIE EXPORT and many others.

The Permeable Stage finished Saturday night with a concert by the electro-brass duo Die Vögel.

Queer pornographic art has radicalized wet aesthetics in promising ways: it realises its visceral, motoric, and tactile potential in a post-patriarchal and sex-positive project. The viewer experiences queer pornography’s wet aesthetics as heating by melting. It radically decenters our subject/object experience and our fixed sexual identities, orientations, fetishes, and bodies. We are seduced into a sex-positive re-appropriation of bodily fluids, and our experience of desire and pleasure is reconstructed as dispossession, abundance, and surrender. In contemporary society however the ideological resonance of fluidity and flexibility is challenging a politics of wet aesthetics; therefore a questioning of its pitfalls and rhythms is needed.

Petra Van Brabandt is a philosopher and teaches semiotics, art theory, and cultural criticism at St Lucas School of Arts, Antwerp, Belgium. She is member of the research group Art & Narrativity. Her research focuses on sociopolitical dimensions of art. She writes and lectures about art and feminism, queer art, art and pornography, art and postcolonialism, and laziness.

Beyond the Erotics of Orientalism: Sexualized Torture, Anti-Blackness and the Persistence of White Terror

The talk examines the use of sexualized torture in post-9/11 U.S. security regimes. Contrary to common belief, confessions made under the influence of torture produce notoriously unreliable data. Most modern interrogation manuals thus stress not to use torture as a means of intelligence gathering. Why then torture when torture is known not to work? What is the value of torture if it does not produce actionable intelligence? What makes these carceral practices possible and desirable as technologies of security? The talk explores how the torture of Muslim/ified prisoners and U.S. security policy more broadly are animated not only by the erotics of Orientalism but also the libidinal economies of antiblackness. This discussion raises questions about queer-feminist notions of pleasure, desire and the racial-sexual.

Melanie Richter-Montpetit is a Lecturer at the University of Sheffield. Her research explores affective and material economies of contemporary war with focus on the ongoing hold of racial-sexual and colonial formations of power in liberal security regimes. She received a 2017-2018 Leverhulme Research Fellowship and is currently a Visiting Scholar at the University of Toronto.

The 120 Days of Sodom was composed in prison on the cusp of radical transformations in the nature of power. It still belongs to the feudal world, and takes its model in Boccaccio’s Decameron. But at the same time it appropriates and eroticizes the disciplinary technologies that were only just beginning to reshape the army, the school, and above all the prison itself. The 120 Days of Sodom is Sade’s perception in dream of a political reality that was still being born. His systematization of the 600 passions, the protagonists’ meticulous subdivision and reglementation of time, and the anatomical isolation of organs in the scenes presented (anatomē: dissection) each take an incipient disciplinary technology to its extreme. Here, our continued fascination for Sade and Sadian images poses a problem. It points to something still unresolved in our erotic investment in disciplinary power, despite the fact that other technologies have modified and replaced it.

Austin Gross has written on psychoanalysis and continental philosophy, and is currently a PhD student at the Center for Research in Modern European Philosophy (London).

In her section on anxiety, entitled Anxiety: Sister of Shame, Joan Copjec recasts Freud’s definition of anxiety as an affect insofar as it is not the repressed that returns and causes anxiety, but the yawning gap (between perception and displacement) that shows itself for a moment; anxiety occurs when the subject’s shameful relationship to its existence opens up, when anxiety loosens the cement for moments and stops the flight into being. What can be diagnosed today is a shift of sexuality towards its possible abolition in a comprehensively psychoanalytical sense. As one of the master narratives of the twentieth centuries, the psychoanalytical notion of the sexual loses its frame of reference and dissolves into many competing models for practicing and defining sexuality. Queer, asexual, abstract sex, the organ trade, migratory movements, and the spiral of capitalist development are indications forming a grid of relations within which the genealogical power of sexuality displays clear traces of shifting.

Marie-Luise Angerer is a professor of Media Studies at the University of Potsdam. The focus of her research is on media technology, affect and neuroscientific reformulations of desire and sexuality. Recent books include Ecology of Affect. Intensive Milieus and Contingent Encounters (2017) and Desire after Affect (2014).